Looking back on 2020 fundraising

Posted by NHS Charities Together
On 28th December 2020
Categories: 2020
Make a Donation

The efforts to donate and raise awareness across the UK this year have been overwhelming, and we are so grateful to all those who have supported and continue to support NHS Charities Together. As the year draws to a close, we look back on some of the inspiring fundraising activities.

As well as raising money, many fundraising initiatives encouraged people to stay active in a time when it was more difficult to do so. The Run for Heroes social media challenge, started by Olivia Strong from Edinburgh, asked people to run 5k, donate £5 then nominate five others to do the same. The campaign was supported by countless celebrities, and raised over £7 million for NHS Charities Together. In Stoke-on-Trent, professional dancer brothers AJ and Curtis Pritchard rallied the nation to #DressUpDanceDonate. Participants were invited to join video tutorials over a weekend in April and dress up for a final virtual group performance.

The nation reacted with awe to Captain Tom’s unforgettable fundraising efforts, and people of all ages were inspired to follow in his footsteps. Frank Mills from Bristol, a 6-year-old with spina bifida, walked every day and raised £280,000. In Ardvar, Scotland, great-grandmother Margaret Payne challenged herself to climb the equivalent of Mount Suilven on her staircase at home. The £360,000 she raised was split between NHS Charities Together, Highlands Hospice and the RNLI.

Although we saw many much-loved events cancelled this year, organisers took the opportunity to raise money through virtual initiatives. Equestrian Relief, coordinated by the teams behind Bolesworth and Liverpool International Horse Shows, saw leading figures in the horse-riding world take part in daily challenges, including running 5k as fast as possible and a Bake Off Easter Cake Challenge. The Virtual Grand National broadcast pre-recorded races and asked fans to donate the bet they would have placed at the annual horse racing event in Aintree had it gone ahead.

Ian Alcorn, a dad from Nottingham, raised nearly £150,000 running the Great British Campout. He set up camp in his garden with his kids to break the monotony of lockdown, and shared the idea with friends via a Facebook group, asking them to donate £2 and set up camp in their own gardens. The idea spread and soon there were over 25,000 members in the Facebook group.

These incredible fundraising efforts stand among thousands of others, and the money raised has made a huge difference to patients and staff struggling to cope with the effects of the Covid-19 pandemic. NHS Charities Together donations have supplied services and resources above and beyond what the NHS alone can provide.

Taking care of the mental health of NHS staff is hugely important, and funding has meant hospitals have benefited from enhanced wellbeing resources for staff. Many Wobble Rooms, Wellbeing Hubs and Wellbeing Pods have been set up, all offering quiet spaces for staff to take time to reflect during stressful shifts. Staff have also been given wellbeing resource boxes, containing essential mindfulness and support information as well as supplies to get them through their shifts such as toiletries, tissues, hand creams and snacks. New appointments have been made to improve counselling services across hospitals, including a Health and Wellbeing Practitioner for the BAME workforce at South West Yorkshire Partnership NHS Foundation Trust.

Funding has also contributed to efforts to improve the lives of patients. Virtual Visiting initiatives have seen hospitals purchase tablets and computers so that people in wards can stay in touch with their loved ones via video calling. Resources provided to keep patients occupied and entertained include radios and televisions, art and activity packs, and toys for children. Patients who are vulnerable to Covid-19 complications are being helped with at-home equipment, including Cystic Fibrosis lung monitors and blood pressure monitors for pregnant women.

You can find out more about the impact the funding is making here.

Thanks to generous support for NHS Charities Together, NHS charities have spread festive cheer to lift the...

END_OF_DOCUMENT_TOKEN_TO_BE_REPLACED

How do you say thank you to the people who raised a scarcely believable £150m for NHS charities in such...

END_OF_DOCUMENT_TOKEN_TO_BE_REPLACED 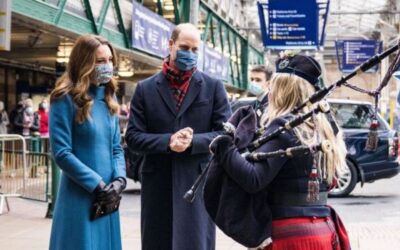 The Duke and Duchess of Cambridge become Joint Patrons

During the first visit of their Royal Train Tour across the country, it was announced that The Duke and...